Provision of fuels for combustions engines 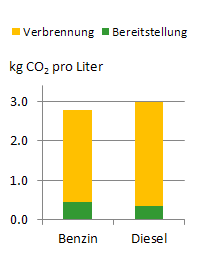 Fuels contain chemical energy, which is converted in an engine into drive energy for the vehicle. The most notable feature is their high energy density. The most frequently used fuels by far are petrol and diesel, which are both based on oil. Providing this fuel includes the exploration and delivery of oil, processing in a refinery and all transportation and distribution processes in between. The environmental effects of providing petrol and diesel when these vehicles are then used on the roads are usually significantly lower than the environmental effects arising from combustion in the vehicle.

As the different fuels have different energy densities, the environmental effects must be related to their energy content to make any illustration comparable. In the following, fuel is discussed not in litres but in megajoules (MJ). One litre of petrol contains around 31 MJ and one litre of diesel around 35 MJ of energy (without any mixing with biofuels.)

Against a background of ever scarcer conventional oil fields, the use of “unconventional” oil deposits (e.g. oil sands and oil shales) could also increase. According to forecasts by the International Energy Agency IEA, their proportion of worldwide oil production in 2035 would be over 10%. As the exploitation of these deposits is very costly and energy-intensive, providing fuel in this way would cause around double the greenhouse gas emissions as conventional production.

It is also conceivable that in the future, coal-to-liquid fuel (CtL) could acquire a significant market share because, according to current estimates, the global coal reserves will be exhausted much later than the crude oil reserves. These fuels are acquired from coal in an extremely energy-intensive process; their manufacturing (with currently available technology) releases around 20 times as much climate gas as the manufacturing of conventional fuels. The use of these fuels would therefore have a severe effect on the entire climate record of combustion vehicles.

The provision of biofuels is connected with significantly higher greenhouse gas emissions than the manufacturing of oil-based fuels. These result mainly from agricultural processes (e.g. fertilising). However, no further climate burden arises from carbon combustion during the use phase, as the atmosphere has already absorbed the contained carbon. Biofuels therefore perform considerably better there than fossil fuels in the overall assessment (well to wheel). However, a competition situation can arise with food production and through direct and indirect changes to land use. But these effects are difficult to quantify.

However, with biofuels, there are big differences in the life cycle assessments of the different manufacturing paths. Bioethanol performs particularly well; this is manufactured from sugar cane. Usually, there is greater climate relief to be had through bioethanol compared to petrol rather than biodiesel compared to fossil diesel.