Battery-powered passenger cars registered today have an advantage over conventional passenger cars in terms of their life-cycle carbon footprint (incl. vehicle manufacturing and energy supply) when using the German power mix. This applies in particular to urban and commercial vehicles.

The reduction of greenhouse gas emissions is a central political aim for the introduction of electric vehicles. In many cases, this can be achieved with current electric vehicles. In average use, a battery-powered car with a real range of approximately 200 km gives a CO2 saving of around 20% compared to a similar petrol car on the assumption that the current power mix is used – and taking account of the entire vehicle life cycle including manufacture and disposal. So the electric vehicle is more or less equal to a comparable diesel vehicle in terms of CO2 emissions. If we also consider that over the lifetime of the vehicle (assumed to be
13 years), the energy transition will ensure that the climate footprint for electricity generation will improve further, we can even assume an advantage of over 10% for an electric vehicle registered today compared to a diesel equivalent. These ratios change only marginally with the vehicle size.

Since our UMBReLA study in 2011, the environmental assessment of electric vehicles has improved in one key area. On the one hand, this is due to the ongoing development of lithium-ion batteries – nowadays we can assume that the battery will not normally need to be replaced during the vehicle’s life cycle. On the other hand, the proportion of renewable energies in the German power mix has increased. The carbon footprint of battery vehicles has improved slightly for this reason by comparison with our study on the further development and in-depth analysis of the environmental record of electric vehicles (commissioned by the Federal Environment Agency, 2015). 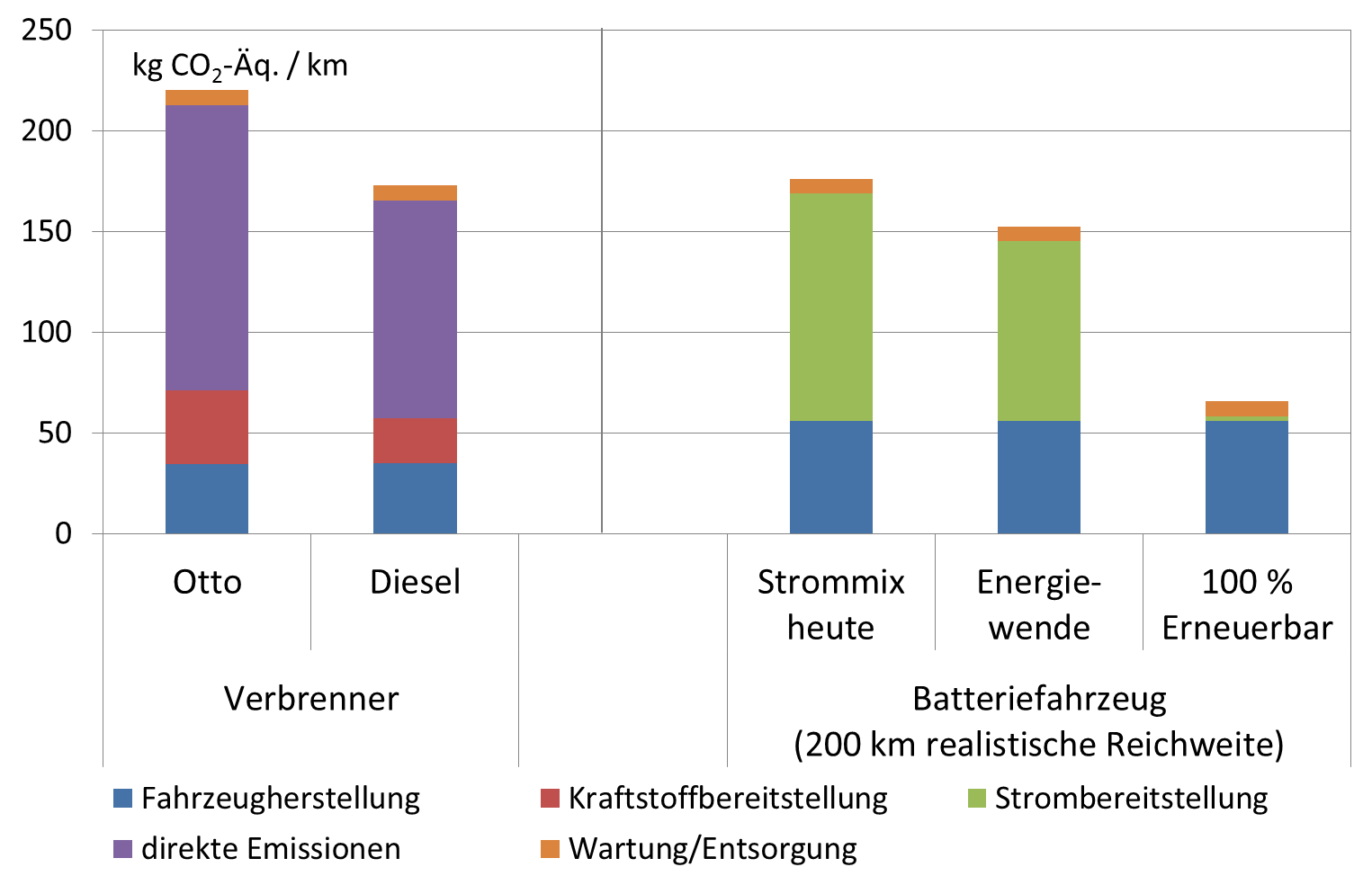 Climate footprint of battery electric vehicles in the compact class in average use, compared to conventional new vehicles.

In the comparison between battery-powered and combustion-engined vehicles, there are differences between the distribution of emissions between the individual sections of the life cycle, alongside the overall emissions throughout the life cycle. For combustion-engined vehicles, the climate impact can be traced particularly to the direct exhaust emissions, in particular the carbon dioxide emissions (CO2). Alongside this, the environmental effects of fuel provision (oil extraction, refining and distribution) are also relevant. These account for around 25% of the climatic effect of fuel combustion for petrol, and around 16% for diesel. Overall, the direct and indirect greenhouse gas emissions through vehicle use are responsible for around 80% of the climatic effect over the entire lifespan of the vehicle.

By contrast, the greatest contribution to environmental effects from electric vehicles comes from electricity provision (67%), which is of course likewise indirectly linked to vehicle use. The energy consumption of a medium-sized compact class electric passenger car is currently around 19 kWh/100 km on average. The efficiency of the powertrain is therefore mostly independent of the speed – by contrast with combustion engines.

Throughout the life cycle of an electric car, the manufacturing costs also contribute a proportion of over 30% to the climatic effect. Around 9.5 tonnes of CO2 equivalents are released during production of a battery vehicle with a 200 km range; the figure is just under 6 tonnes for combustion-engined cars. Vehicle disposal and maintenance play only a subordinate role, which is sometimes because the preparation of recycled materials for vehicle manufacturing is added to the production of the vehicle.

Comparison of environmental effects for a battery vehicle (with a range of 200 km) and a combustion-engined vehicle:

Comparison of resource requirements for a battery vehicle (with a range of 100 km) and a combustion vehicle: