Most modern combustion-engined passenger cars have either a petrol or diesel engine. The energy and/or fuel consumption therefore depends on both the general vehicle properties (such as weight, aerodynamics etc.) and the engine efficiency. Driving behaviour (speed, acceleration) and the place of use (town, motorway, country road) also play a significant role. Diesel engines are generally slightly more efficient than petrol engines – i.e. diesel engines usually have slightly lower fuel consumption than comparable petrol vehicles.

The CO2 emissions from combustion-engined passenger cars depend directly on the fuel consumption. Biofuels are considered to be carbon-neutral because the CO2 was extracted from the atmosphere during growth of the biomass. However, the agricultural production of biofuels is partly associated with significant CO2emissions (and other environmental effects). The overall balance for biofuels must therefore be considered across the entire life cycle. All conventional fuels today contain proportions of biofuels (admixture). 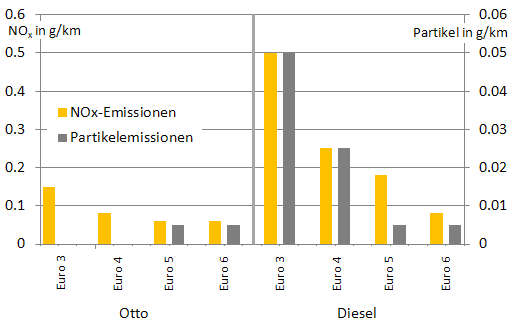